This afternoon, the Commons is to consider alternative options for Brexit including various end-states, that is the Customs Union, a Single Market, Canada, Norway, “Common Market 2.0” etc; as well as various resolution processes, that is, May’s Withdrawal Agreement (WA), no deal, revocation, rerunning the referendum, the “Malthouse compromise” and so on. It is mysterious to me that MPs consider it worthwhile to give time to the former as they are not the subject of the WA, the rejection of which has brought us to this point. It is, however, true to say that the WA pushes the country towards a softer rather than a harder Brexit, with many seeing the backstop as binding the country to a regulatory alignment which takes away from the promised benefits. It also suits May’s book that these matters should be in the air as spooking ERG hold-outs, who now seem at last to be blinking.

This is a good time to thank all of you replying to the straw-poll on indicative votes which I circulated on Sunday. Results came in from the UK, Europe and further afield; from Parliamentarians, the City, think-tanks and elsewhere. Those coming back to me seem to be a fairly representative sample, in that they are split between leave and remain - 15% would prefer to revoke the Article 50 notice outright and 54% would prefer to rerun the “Leave-Remain” referendum; with 31% declaring their support for the government, though not the Prime-Minister: see below. Here is the table of preferences, sorted by end-state, other outcomes and confidence and then ranked from highest to lowest. 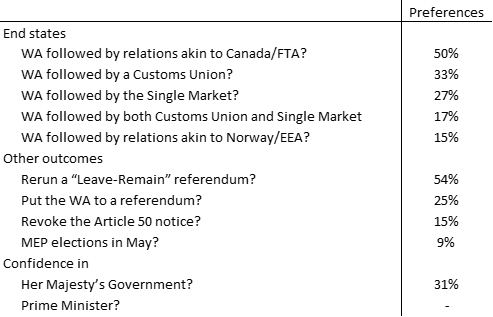 The most striking finding is the strong appetite for a rerun of a “Leave-Remain” referendum (54%, as already noted); and the total absence of support for May (no votes whatsoever). Otherwise, this group at least seems to prefer a harder rather than a softer Brexit (50% for Canada, vs 33% for a Customs Union and 27% for the Single Market). On the other hand, both of the latter attracted only 17% of respondents, apparently confirmed by the 15% for the virtually identical “Norway/EEA” option, though there may be confusion on this score: see below. Once again, this group at least has little appetite for revoking the Article 50 notice or participating in the elections for MEPs. If my readers were thinking this through, this means they want a shorter rather than a longer delay. We now turn to the table of predictions, set out as the first table. 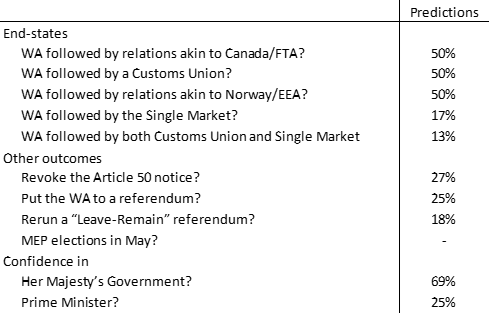 Seven out of ten respondents expect the Tories to be able to hang on, though only a quarter expect May to do so. Constitutionally, of course, the latter is a matter for Party rather than Parliament, but the question served to flush out expectations of her survival. Parliamentary deadlock is foreseen with equal expectation (50%) of participation in a Customs Union or Norway/EEA, as well as with more remote Canada/FTA relations. Confusingly, the equivalent “Customs Union plus Single Market” is expected to attract Parliamentary support by only 15% of correspondents. Possibly this is because the “Norway option” is much in the air without being fully explained. Few expect the Commons to go for a rerun of the referendum or the single market. No-one expects Parliament to tolerate MEP elections in May.

We now turn to a couple of tables flushing out respondents’ hopes and fears. First those options which respondents expect to see but dislike.

Here, the most striking finding is how many respondents seek a change of government but do not expect it to occur; so too for a change of Prime Minister but at smaller levels. Otherwise, we may discount the figures for “Norway/FTA”, as there seems to be some confusion on this score, and other figures as too small to justify our attention.

The strength of hope for a referendum is offset by fear that it will not occur. Once again, the other findings are too small to be significant.

My readers do not expect the Commons to give a clear lead; they show some understandable uncertainty as to the jargon in the air. They differ markedly from me in their enthusiasm for a rerun of the referendum. (Note to self: goose up arguments about the incoherence of this course.) May is universally unloved: who knew? Elections for MEPs are similarly abhorrent, but this will only count for something if we get into discussions about the length of delay.

I touched above on confusion and this seems to be infectious. I have emphasised the distinction between debates about end-states which I see as irrelevant at this point; and debates on other matters which may bear upon our current pass. I dwell upon the EU’s own communique, which states

The EU is not looking for MPs to agree upon an end-state; they want a clear steer on the WA itself. So either May is tolerating these votes as a way of spooking the ERG and the DUP, or MPs are acting as self-indulgently as our unloved PM suggests. We can see that spooking is doing the trick. First Rees-Mogg and now Boris seem to be clambering aboard the WA, for lack of better and as part of a larger deal to ensure that subsequent negotiations are handled by a new leader in a more satisfactory manner. This is odd if we are to take seriously the objection to the WA that it binds future leaders to a deal in all probability worse than what came before.

This argues for Brexiteers to hold out against May’ s disastrous deal. Failing this, they should recognise that they’ve come to an end-state of their own. May's WA is so bad that they should grit their teeth and back a rerun or revocation. Then to lick their wounds, count their dead, and settle down for a long haul with a view to learning from their mistakes and getting it right for Brexit 2.0.