So now we know

Doesn’t it just get your goat? all those reminders of Lyndon Johnson’s homespun shrewdness that politicians need first to know how to count. But then again, at this moment it’s not wrong that the wisdom of Gillespie County should bear down on us. So here are the counts which haunt  Theresa May, Julian Smith and Jean-Claude Juncker. Make no mistake, plenty of others are doing the same sums - inky-fingered clerks in Whitehall and the Berlaymont, if not the tasselled-loafer crowd of the Belgravia chanceries and City dealing-rooms.

Since 15 January 2009, the Commons has divided on Brexit on ten occasions, giving spreadsheet-jockeys a full 6,500 data points to grapple with. From this, the character of the challenge to agree May’s deal can be defined with precision: now we know.

First, the overall composition of the House of Commons. The table below shows its characteristics, setting out MPs affiliation as between the two principal parties, the extent of the payroll vote on both sides (ie, those holding government or parliamentary office from their party and conventionally strictly bound to its line), those devotedly loyal to their party’s leadership, and others of unlike mind.

May has lost control of her party.  The most robust test of MPs’ positions on Brexit is to measure their alignment with their purported leaders. Taking the ten votes on the topic since 15 January in the round, 172 Tory MPs have voted exactly as has the PM, that is, Aye, No, No, No, No, No, Aye, No, No, Aye. To put it another way, nearly half (46% as rounded, here and throughout) have failed to follow her lead at one or another point over the ten Brexit votes concerned. She has only 39 consistent votes which she hasn’t bought with office. It gets worse. Over the critical “meaningful vote” of January 16, twelve percent of her payroll (at that time 71% of her nominal support) failed to follow her lead. She then replaced defectors and expanded the overall payroll (now 77% of her nominal support), but even so since then some seven percent have failed to follow her lead. Talk of Cabinet resignations by unhappy Remainers opens up a Pandora’s box all round.

The ERG has an irreducible base of one sixth of the parliamentary Tories.  If we again take the Brexit votes since 15 January in the round, we see that 53 Tory MPs have voted identically to the Chairman of the ERG, Jacob Rees-Mogg, that is, No, No, No, No, No, No, Aye, No, No, Abstain. This is the most conservative test of the Group’s reach. Another 52 MPs have voted with him on nine out of ten occasions. The discipline of the core group and the extent of its influence pose close to an insuperable obstacle for the Prime Minister at one third of the parliamentary party.

By comparison, Corbyn has maintained party discipline. The Brexit votes since 15 January show that 173 Labour MPs (68% of the total) have followed the lead of Jeremy Corbyn in every particular, that is, No, Aye, Aye, Aye, Aye, Aye, No, Aye, Abstain, No. (So, remarkably, have three others: a Liberal Democrat and two Scottish Nationalists.) Despite widespread criticism, Labour’s leader has succeeded in reining in a fractious parliamentary party predominantly comprising Remainers. This tells us that he is likely to stand by his stubborn opposition to anything May puts to him; and that he is in a position to continue to do so. We now turn to an exploration of the relationship between election outcomes and the pattern of Commons’ divisions. 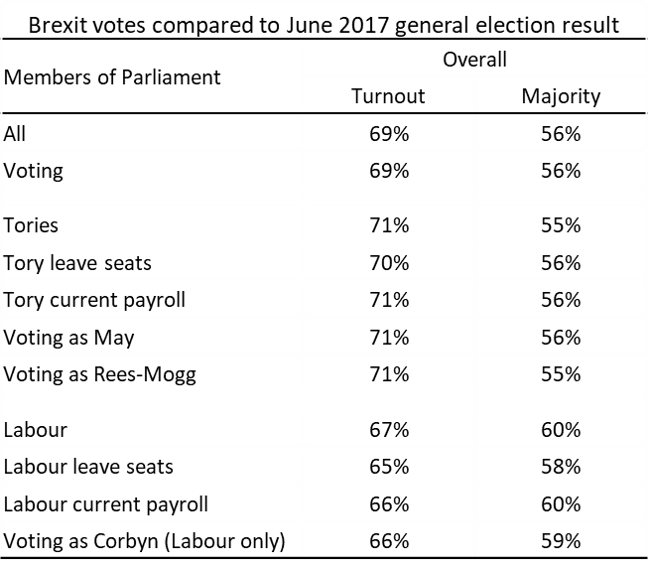 Tories get higher turnouts; Labour gets better majorities.  The table shows that Conservative constituencies are more conscientious about voting, with turnouts of between 70% and 71% versus Labour constituencies of 55% to 56%; but that Labour has a better lock on the seats it holds with majorities of between 65% and 67%, by comparison with Tory majorities of between 58% and 60%. There is little in the figures for turnout and majority to suggest much distinction between Leave and Remain seats or the voting pattern of MPs. On the other hand, there is nothing to support the view that Labour can take its leave seats for granted, with turnout and majorities two percentage points below the average for the party; Corbyn knows this. Finally, to examine the association between referendum outcomes and MP’s conduct. 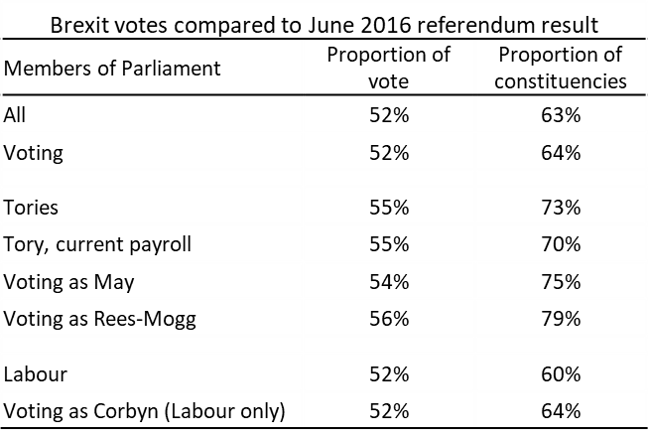 We hear that Brussels affects to take May’s defeat on Thursday as a reason for her to seek support from Corbyn. But the count tells us that:

Away from the count, the parliamentary advocates of a second referendum are in like condition to Labour Remainers. This should be no surprise as they’re the same gutless bunch, with this weekend’s talk of a last-minute demonstration best seen as a token of surrender. Delay seems yet another gutless attempt to put off the ticking inevitability of it all. No-one can rule it out, but it is unlikely to be for more than a few weeks and it’s hard to see how it would make a difference.

Neither May nor Brussels is yet in a mood to take the Malthouse proposal seriously. It would have to be sold all round as an alternative to chaos. But May and Brussels represent a tough crowd for this scheme, indeed Brussels would find it close to impossible to sell to the EU’s Member States so late in the day.

Nonetheless, the count tells us that May’s weekend appeal for party loyalty will fall on deaf ears. It looks like she has little choice but to tack anew to the ERG, never less than one sixth of her party, generally twice as much, and who knows how much more if the payroll vote breaks further open? The alternative is nada, nichts, niente, rien. There is increasing evidence of preparation for this, no longer particularly sub rosa. This might not be what May wants - what she’d prefer to report to Barnier, Juncker and Tusk - but you know what? They have made their own count; now everyone knows.