So, a deal. Brussels never did get “sovereignty”, with Ursula von der Leyen’s remarks actually about solidarity. Just as well: no-one wants to hear a former German defence minister talk up national destiny. Meanwhile London never got the preciousness of the acquis and the wounds it plasters over. The outcome also speaks to lessons from the first round: Brussels gloried as the Brits blinked, London bristled at European browbeating.

Hereunder my take on the Christmas Eve acquis. At time of writing, I'm without sight of the full text (now to hand), so I’m working off HMG’s explainer, transparently pitch-rolling throughout; no doubt the EU has its own perspective. Much is commonsensical, eg, co-operation on air and road transport, nuclear safety, data control, exchange of information on crims and much else. Some is emotional but trivial, eg, doing without Erasmus - see below; some asserts independence, eg, renouncing EU defence initiatives.

Let’s overlook trade in goods save to note that current arrangements for car and plane production are de facto intact. The agreement is weak on services, less important given the real-world imperfections of the single market. As to financial services, there is to be

This raises several questions. Has there been a sub rosa deal on Sizewell C? Why a separate agreement? Will anything happen? If not, it may not matter, as (1) the City seems to have adjusted; and (2) continental regulators know that trickiness on equivalence will chase international players to London’s safe haven.

The explainer’s remarks on competition restate the status quo ante. Those on subsidy contain boilerplate about transparency and arms-length regulation, together with “…accelerated arbitration [plus] compensation if…unnecessary or disproportionate... subsidy…risks…significant harm…” This regulatory body sounds like a stretch. We don’t have one. Who does? will anyone establish them? No-one should overlook bureaucrats’ appetite for employment so you never know, but the test of significance could run and run.

On state enterprises, Europeans are at liberty to continue their own sweet way. Taxation has only more boilerplate. The agreements on labour, social standards, environment, climate, trade and sustainable development are set up as unenforceable.

The fishery deal contemplates “arrangements for compensation if a Party decides not to grant access to its waters...All such measures must be commensurate to the economic and social impact …and are subject to arbitration”, caveats giving the lawyers scope to stymie cross-enforcement. If it comes up, moreover, the deal can be terminated on nine months’ notice.

Mindful of the dodgy source, my preliminary take is favourable. Frost seems to have done well on the topics I care about: adjudication and the level playing field; while stabilising trade in goods. Trade in the UK’s powerhouse, financial services, has been kicked into the long grass, reducing any threat.

So to a concluding tour d’horizon, starting with what we’ve lost: not so much free(ish) trade as the vaulting ambition for Britons to live, love and work in Europe. This has long been hyperbolic. Europe has few jobs we want, though sundowners and Erasmus still razzle-dazzle. Then again, Mediterranean nations know all about separating retirees from their pounds and European Unis cater largely for the unambitious - more come here than go there. As for the EU, it has lost the acquis of our intrinsic anti-dirigisme. A mixed blessing: our North Sea neighbours intermittently pushed our bloody-mindedness, but we just upset everyone else.

The vaccine approval reminds us that the EU convoy moves with the slowest. Can Britain be consistently nimbler? Pandemic responses have disappointed, illustrating why the much-reviled Cummings sought root and branch reform. Evidently, he wasn’t the man for the job, but problems remain. No doubt we should be looking for best practice wherever to hand: Estonia’s digital state, German localism. But it is always challenging to reform a political culture reaching back a millennium and hallowed by freedom.

Now both sides must shift for themselves. As to free trade agreements, the EU will struggle with the continental complications of China, India and the US. It has also exhausted the low-hanging fruit of biddable dependencies. The decades taken to agree with Japan and Canada attest to sclerosis, with Indo-Pacific nations now looking elsewhere. The UK will add piecemeal deals to the fifty-eight Boris claimed on Christmas Eve. A transatlantic prize may also be closer than once feared: the word from Washington is that last weekend Biden upset the EU with his even-handed leaning on Berlin, London and Paris to “get to yes”.

Britain has had a four-year wobble. The 2016 vote’s gravity and narrowness led Remainers to claim rights to withhold loser’s consent. The chart below (cribbed from the Sunday Times) shows their anguish, with over four out of ten still “devastated”. 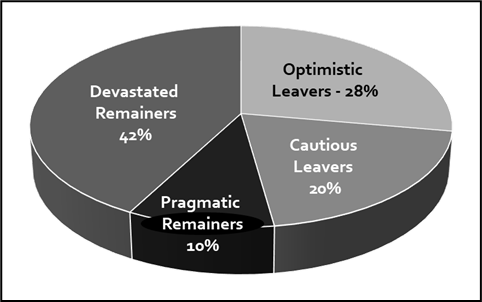 Let’s hope we can now bind our wounds. We need time and good news, the latter only available from energetic adjustment by the private sector. How to pull this off without accentuating geographical imbalances? The chart below shows the latest figures available of the fiscal load by region, confirming the competitive edge of the southeast and its financial services, continuing to carry the rest of the country.

The survey data cited above (originally printed by the FT through gritted teeth) shows how little has changed, trapping Johnson between his levelling-up agenda and the need both to repeal the new aquis of pandemic regulations and to introduce further regulatory and tax restraint. Such policies do little for the newly Tory “red wall”, but only they can generate the animal spirits required, not just for trade adjustment but for our shiny new problem, redeeming the calamitous debt of the last year.

This is the last of the Brexit2016 series of blogs. Many thanks to all of you who have exchanged thoughts with me over the last five years. Les jeux sont faits. Now to make it work in 2021 and thereafter.