So far, the election has been a slow bicycle-race. Farage unsaddled himself at the outset and Swinson has fallen off; I return to them below. As to the leaders of the major parties, their countenance betrays their strain: both have aged a decade in the last six months. Corbyn’s most recent TV appearance gave the impression of a patient under lithium, while Boris’s Marmite brio has been decisively caged by Isaac Levido, the Aussie running his show.

Halfway through the campaign, Labour is not quite on the ropes but has been damaged by a manifesto promising every kiddie an early Christmas. On Tuesday, Corbyn took further body-blows from the Chief Rabbi and Andrew Neil. Since then, the party has been finding it hard to get a hearing, with its NHS dossier treated as dodgy, unhappily recalling Blair’s discredit. Even so, young, new and diehard voters remain open to Labour’s retail offer and prey to its signature schmaltz.

The Tories’ discipline shows up as a lack of nerve, attracting the criticism that its manifesto is supine and Johnson is phoning in his stump-speeches, though no-one is suggesting Maybot levels of detachment. It’s clear what this is about: Levido knows that the election is for the Tories to lose and wants to avoid mistakes, thus the conspicuous absence of Rees-Mogg, whose lofty ways are deemed best rusticated to Northeast Somerset.

The halfway point has been marked by YouGov’s “MRP” poll, a cookbook of techniques which have become famous as the only recipe getting May’s election right. The authors have been careful with their caveats: in particular, this poll comes a few days earlier than last time, too soon for any late narrowing of the winners’ lead. Then again, interviews from 20 to 26 Nov missed Labour’s car-crashes during the last day of fieldwork. YouGov claims that the margin of error is incalculable but the poll nonetheless shows ranges, with the Tories set for working majorities in all scenarios. 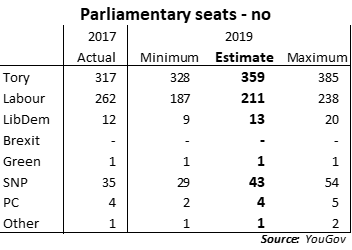 The poll offers constituency detail which changes the weather. Laggards have an opportunity to revisit tactics, with activists either invigorated or succumbing to infighting; those to the fore risk complacency. No-one can predict the effect upon turnout or tactical voting. YouGov explicitly excludes the latter, but their figures show how it might work. The tables below set out the minimum, predicted and maximum vote shares in two London constituencies where the LibDems have parachuted in candidates: Chuka Umunna in the Cities of London and Westminster; and Luciana Berger in Finchley and Golders Green. 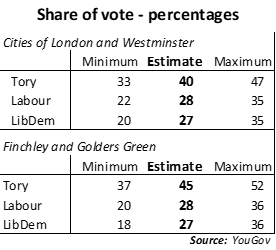 YouGov calls both as “likely Conservative”, where “likely…” is their mid-point between “leaning…” and “safe…”. Nonetheless, the table shows that in the first example, either Labour or the LibDems might win on the published figures; and in the second, the Tories have it locked in by only a single percentage point. Figures like these will encourage the laggards to press on with tactical voting.

So to the endgame. The campaign’s last two weeks take place before unusually hostile voters. They remember sixteen years of disappointments from those they trusted: all the way from the original “dodgy dossier”, to “not fixing the roof while the sun shined”, to Blair getting rich from his Rolodex, to the bust banks, to the expenses scandal, to celeb sexual predators, to “there’s no money left”, to the LibDems’ bait-and-switch on student fees, to austerity, to uncontrolled immigration, to botched Universal Credit. So many see the last parliament as a culmination of these failings that they are in no mood to entertain new promises. The Tories have responded best by pledging least. They must also be thanking their lucky stars that the last parliament’s dithering and their own new leader have blunted the barb of incumbency. Even so, they should not doubt the voters’ eagerness to punish any hint of hubris, eg, Boris ducking his own Andrew Neil moment.

The hapless LibDems are rowing back from the own-goal of their revoke stance. Swinson’s new play is to aim off Brexit, turning to Johnson’s broken promises. This risks another mishap, evoking her party’s own bad faith with the voters - betraying the students and frustrating the referendum.

The Brexit Party will be giving mind to YouGov’s figures pointing to the threat it poses to Tory wins in Labour marginals in the North and Midlands. The Tories may hate Farage, but he is a keen tactician and it would be rash to rule out explicit or tacit collaboration.

Labour has seen the brink. It is now to relaunch its campaign to focus on its base rather than go after Tory marginals. The party needs to avoid alienating metropolitan Leavers, so expect a bolstered retail offer to Remainers. Labour’s problem is its Santa Claus manifesto: how can Corbyn say, “No honestly, we really mean this.”?

The Tories may comfort themselves that they have avoided disasters so far. Nonetheless, there are plenty of risks ahead. They must avoid the appearance of complacency to the voters, let alone an outbreak of the real thing among activists. Trump is coming, introducing additional incalculable uncertainty. Boris remains his party’s best calling-card but halfway in, he must strike a balance between blowing it and bottling it. Sleepless nights all round.