The discipline of the prospectus

Boris has got his election and ingenuously places his future in our hands. So what do we know? what alternatives are before us? We may expect the parties to focus-group their lines, maybe even their policies. But what will their manifestos represent by way of a route to a satisfactory outcome for the grim epic which Brexit has become? In my old game, we spoke of “the discipline of the prospectus”, pompously pretending that our formulaic due-diligence and verification flushed out the issues in the companies we were bringing to market. And fair enough, sometimes they did. So too in the last election: we saw May destroyed by her ill-judged commitment to and rapid repudiation of Nick Timothy’s unsaleable policy for funding care for the elderly. Boris is said to be alert to this particular bear-trap. But there will be others.

At present, only the LibDems have a coherent stance on Brexit, straightforwardly campaigning to revoke the Article 50 notice, hoping to peel off Remain voters from both the major parties. They could be onto something. Labour’s position has the coherence of a composite motion. It cobbles together the regulatory continuity prized by incumbents and the workers’ rights prized by trade unionists (“we’ll renegotiate”); the bodge uniting the PLP (“confirmatory referendum”); the Remainers’ predominance (“we’ll campaign against our own deal”); all presided over as “constructive ambiguity”, by a leader who sees leaving the EU as enabling his Chavista pipe-dreams.

The Tories would be rash to count chickens. Boris may be able to fob off his missed deadline, given Parliament’s disrepute. He is, however, obliged to campaign for a deal little better than May’s. He’s done nothing about the unconditional money or the prolonged jurisdiction of the ECJ. In order to get rid of the backstop, he has had to rat on the DUP, bolstering the stories of his unreliability.

In the great scheme of things, this should matter less than the positive effects of moving the level playing field obligations into the non-binding Political Declaration. The redraft plays well with those for whom the point of leaving the EU is a regulatory regime better aligned with our circumstances. On the other hand, voters might reasonably seek more clarity as to plans for the long-term relationship with the EU: how fully arms-length? how long to agree? how willing to walk away? The redraft also opens the door for Corbyn to remind provincial Leavers that the workers should never trust a toff.

Trust will become central. Boris needs enough of a working majority to overcome such Remainers as might be returned under the Tory banner. He wants to avoid having the WAB decked out with a Christmas tree of amendments tying his hands in subsequent negotiations. This plays into the hands of his opponents, for whom it becomes open to argue that a doctor’s mandate is too risky for such a dodgy character.

And so to the Brexit Party. Farage has a connection with Leave voters which circumvents the aversion to Tory scum. Then again, his party is also split. Farage himself is holding out for no deal, while the party’s principal funder, Arron Banks, has said he can live with Boris’ Withdrawal Agreement. This makes a Leaver electoral pact tricky for the Tories, lest they follow Corbyn into “constructive ambiguity” of their own. It’s a better electoral look to let Boris’ yea be yea. If we knew what it was.

The first week or so of the campaign is likely to be taken up with just such matters: positioning, electoral pacts, tactical voting - given the times, app- or social media-led. The table below shows that 8% of Tory seats are vulnerable to a determined Remain push and 26% of Labour seats to a concerted Leave drive. 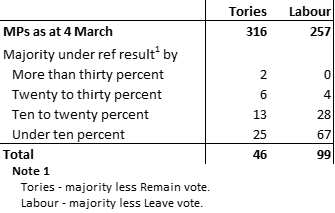 There are thirteen Tory seats where the MP’s majority in 2017 was fifteen percent or more below the referendum majority for Remain. In order of vulnerability, they are first East Renfrewshire, and then Stirling, Putney, Richmond Park, Aberdeen South, Cities of London & Westminster, Wimbledon, Finchley & Golders Green, St Albans, Ochil & South Perthshire, Chelsea & Fulham, Ayr, Carrick & Cumnock and Southport. On their face, however, turnout statistics make a Remain exercise along these lines more difficult. The average for vulnerable Tory MPs was 72.1%, higher than the overall Tory average of 70.8%, both the figures and the differential challenging the prospect of untapped votes for the Remain camp.

There are sixteen Labour seats, where the MP’s majority in 2017 was fifteen percent or more below the referendum majority for Leave. In order of vulnerability, they are first Ashfield and then Dudley North, Great Grimsby, Stoke-On-Trent North, Burnley, Dagenham & Rainham, Sheffield -Hallam, Rother Valley, Bolsover, Blackpool South, Hartlepool, West Bromwich West, Scunthorpe, Bassetlaw, Don Valley, and Penistone & Stocksbridge. In this instance, turnout statistics are more encouraging for a Leave electoral pact, with the average for vulnerable Labour MPs at 64.6%, lower than the party’s overall average - itself low - of 66.5%, both the figures and the differential promising untapped votes for Leave campaigners.

In current electoral conditions, such schemes have their points, both for animating voters and allocating media buys and volunteers. Before we get carried away, however, we should remember that partisan tribalism stands in the way of an outright “coupon election”. In addition, either the season or voter-fatigue could hit differential turnout.

For the time being the polls are decisively with the Government, but we know how that goes. The last campaign was distinguished by gaffes. We may expect better message-discipline from the Tories under a combo of Lynton Crosby’s mucker, Isaac Levido, and everyone’s favourite pantomime villain, Dominic Cummings, with the latter, however, apt to create blow-back of his own. The press gave Labour something of a pass last time, but it would be roseate for the incumbents to expect much by way of more forensic coverage of the opposition: journo’s eyes will be on the former. As they should be. From the Tories as from Labour, we are offered only a policy miasma at present: the discipline of the prospectus has yet to make itself felt.