Last week’s summit of EU heads of government ended in teeth-clenching amity. EU27 leaders jostled each other to declare that “no deal” was unthinkable; Merkel spoke of her hope to “reach the second phase (ie, trade talks) in December”; and May agreed to revisit the EU’s financial claims “line-by-line”. Three explanations are in the air.

The only sensible thing to say is that none of these explanations excludes the others and all played their part. And the last of these is more than just the talk of Brexit zealots.

It’s all about timing. The intersection of the date of Brexit with the annual cycle of company operations is shown in the graphic below.

The date of Brexit and the corporate cycle 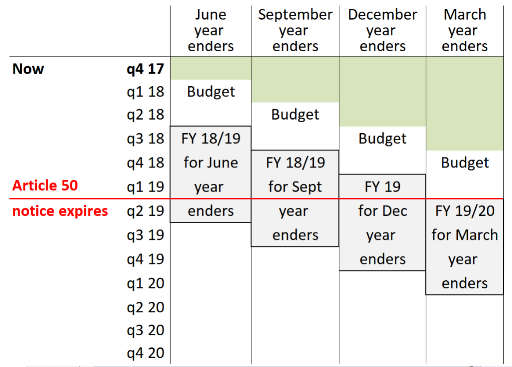 A company’s fiscal year may run as it inclines, but most choose the quarter days shown in the graphic. Although the largest fraction follows the calendar year, a sufficient number chooses other periods for the front of the queue to vary according to events. The graphic illustrates that it is June year-enders who first must budget for the post-Brexit period and that they will be doing so with the turn of the year.

Since the referendum result, institutional investors have been willing to see public companies follow their house views on capital expenditure and M&A activity - some defensive, some opportunistic, many simply stalling. Now however, we are reaching a confluence of crunch-points. Investment banks are looking overseas for operations likely to be regulated from Europe. This combines with the prospect of a government inspired by Wedgwood Benn and Hugo Chavez to spook mobile professionals, upsetting the supply of skilled labour. And the threat of Corbyn is leading proprietors to realise flight capital from private companies and real estate.

In such fractious times, public company chairmen will be mindful of the risk of shareholder suits, leading them to nudge their Boards toward stances that are definite and defensible. Between now and Christmas, one of three alternatives will emerge as action-guiding:

In the absence of clarity, fiduciary responsibility will be construed as obliging Boards to assume the worst, flowing through to CEOs instructing their finance directors and head offices schooling their divisions. Policy will then herd, as budget decisions flow through to suppliers of goods, services, labour and capital, amplified through the investment community back to other companies, and ultimately coming to govern HMG’s own planning. M Macron may well huff and puff that,

“At no moment has Theresa May ever raised a ‘no deal’ as an option. If there are noises, bluff, false information by secondary actors or spectators to this discussion, that is…just life in these matters, or in the media. But in no case is it part of the discussions.”

But this is to affirm what he denies. For ‘no deal’ is not a matter of bluff, but a consequence of the inexorable timetable of the corporate calendar and directors’ appetite for certainty, coming to a head in three months’ time.

So let us channel Thomas Paine, steeling ourselves for the times that test men’s souls between now and the arrival of the jolly greybeard in Coca-Cola livery (that’s for those of us still able to find reindeers in the sky). For the next eight weeks, the stakes will be at their highest. As this morning, lobbyists will weigh in with ponderous warnings; parliamentarians will be at their most fractious and opportunistic; polemicists at home and abroad will attain climaxes of fury; and journos will dial up the heat to temperatures which melt iron. And for those of an apocalyptic cast of mind, there is a further possibility: May herself may trip or her government may fall. On 22 November, it must present its own budget, with Hammond under pressure from all sides and neither he nor his boss with much of a record on gala occasions. Testing times indeed.