Most things are as they seem to be. Brexit suffered a stumble three weeks ago, with the lamentable “Technical Note on Temporary Customs Arrangements”, and its last-minute weasel-words about “intentions” and “backstop”. On the other hand, it made snappy headway last week, when Tory whips and Labour bolters contrived to see off Grieve’s “meaningful vote” amendment. And to be fair, if we are where I expected to be in April’s Six impossible things and last month’s Sound and Fury, I will confess to one or two wobbles of my own. At the beginning of last week, I wasn’t sure that May could pull it off. But she did.

So what in fact has she pulled off? I’m claiming it is what it seems to be: Parliamentary approval for the full-hearted Brexit of her Florence speech. But others join the dots differently. For another view, chew on the FT’s Hiding in plain sight (paywall), which has it that May is perpetrating a cunning plan à la Baldrick. This is to manoeuvre the UK into a version of BRINO, specifically staying in the Customs Union and making further payments. On its face, it is odd that any British public servant should offer the EU and its exporters something for nothing. But what do I know? Let’s set a test: here is a version of a speech May might make to the European Council when they meet on Thursday. Run your eyes over it and then turn to the convenient tick-boxes which follow, handy for analysing the speech she actually gives.

My purpose today is to advance our approach to the final stretch of our negotiations. To remind us, we have yet to finalise the withdrawal agreement which we agreed in principle more than six months ago (the “Joint Report of Negotiators”, dated 8 December 2018); and we are making only halting progress on an agreement to regularise our future relations.

Let me first summarise the position of the United Kingdom. My Government has completed the parliamentary processes which endorse the objectives set out in my Florence speech and subsequently: specifically, to leave the Customs Union and the Single Market. We have circulated papers on best practice in dispute-resolution. And we have made it clear that the deep and special partnership we seek with the EU27 embraces economics and security, as well as various ad hoc “cross-cutting” measures.

Let me expand on some of these matters. We intend to set our own external tariffs, so the Customs Union as it stands will not work for us. On the other hand, we are willing to keep the UK market for goods open to the exporters of the EU27 on the same terms as previously, in return for reciprocity. In some respects, this is of a piece with the full and generous offer we have just made unilaterally, in respect of the 3.6m persons who are EU27 citizens resident in the UK. But it differs in that the offer in respect of persons is unconditional. As to goods, however, if the EU27 declines to agree reciprocity in time for ratification by the end of March 2019, we will move to arms-length trading either at that point or after any agreed period of transition. To minimise private-sector disruption, we intend to give notice of our understanding of the position on 31 October this year.

As to trade in services and the EU’s “internal market”, as far as it goes this benefits us all, reducing public and private borrowing costs for the EU27, opening up the UK market to EU27 public-service contractors (many of them state-owned), and providing low-cost air transport. Otherwise, no-one denies that the Single Market has disappointed. Nonetheless as far as it goes, we start from circumstances of regulatory alignment. We reserve the right to alter regulations where it serves the promotion of trade with third countries, while recognising that the EU27 may reasonably object to measures which discriminate against their own exporters of services. We therefore propose to submit disputes in respect of such matters to best-practice resolution, building on the joint committees which we have introduced into the Draft Withdrawal Agreement. Once again, if the EU27 declines to agree in time for ratification by the end of March 2019, we will move to ad-hoc regulatory divergence either at that point or after any agreed period of transition. Once again to minimise private-sector disruption, we intend to give notice of our understanding of the position on 31 October this year.

As to security, we have made a full and generous offer to continue - indeed intensify - co-operation on this score, while drawing attention to operational failings which need to be addressed and the economic effects of any falling away in co-operation: bluntly, the EU27 will owe us money for Galileo and other projects.

This takes us to the financial aspects of the “Joint Report”. We are all familiar with the formula, “Nothing is agreed until everything is agreed”. This means that I have to make it clear to you, ladies and gentlemen, that in the absence of a full agreement no legal basis exists for any payment from the UK to the EU27 after March 2019. Although the “Nothing is agreed…” formula may also be held to apply with equal force to every part of the “Joint Report” and subsequent papers, the United Kingdom is committed to processes to meet a reasonable construction of clauses 42 to 56 regarding Ireland, together with the “Technical Note on Temporary Customs Arrangements” published three weeks ago. In the absence of a full agreement with the EU27 by the end of October, however, we expect to find it more constructive to resolve these matters at working level, directly with the Irish authorities.

Finally, I turn to another familiar formula, “No deal is better than a bad deal”. There is a sense in which this is no more than an expression of the obvious. On the other hand, some seem to find it a provocative statement of ill-judged defiance. Her Majesty’s Government does not wish to be provocative and it is for others to form a view of its judgement. Whatever your views on this, I have to tell you that later today my Chancellor will announce a fund of £500m, to be applied over the next nine months to contingency planning in case we should fail to agree.

This is not and never has been the UK’s wish - my wish. Let me encourage all concerned to join with David Davis and his team to come to a satisfactory resolution.

My thanks for your attention.

Now for what actually happens. I’d argue that the more of the following twelve items which May mentions on 28 June - the more getting ticks - the more her government is doing what it seems to be doing. This would be preparing for a Brexit which conforms to a reasonable construction of the intentions of the majority of June 2016. The fewer ticks, the more weight to attach to the “cunning plan” brigade. 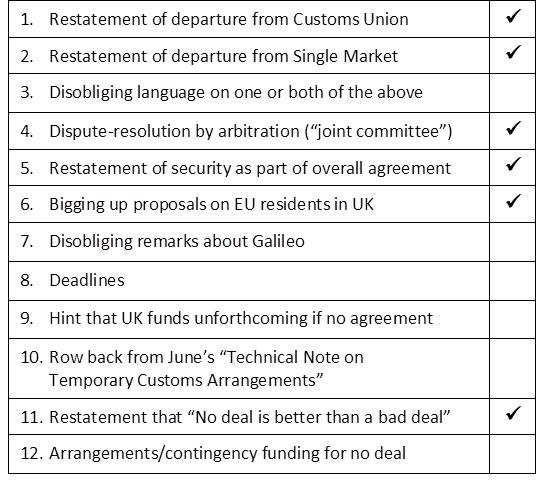 How to score? Well let’s take a rough and ready threshold of fifty percent - six ticks out of twelve. I’ve ticked the six items which I regard as most likely. More than that and it’s very much as it seems to be; less than that and…

PS. Bonus points to May’s speechwriters if they find the kishkes to get her to invite her audience to consider that the EU's institutional dysfunction led the UK to reject it two years ago and now threatens failed negotiations.